Drake Drops “Omertà” and “Money in the Grave”: Listen 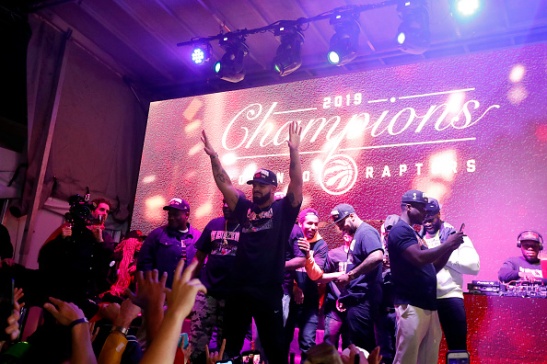 Drake is a man of his word. In an effort to celebrate the Toronto Raptors’ NBA Finals victory, the 6 God releases two new tracks “Money in the Grave,” which features Rick Ross and “Omertà.”

Keeping his fans in the loop, Champagne Papi shared the news about his latest tracks in a post uploaded to Instagram. “Omertà and Money In The Grave feat. @richforever out now on ALL platforms,” he wrote as the caption.

On the track “Money in the Grave,” which is produced by Asoteric, Ljay Currie and Cydney Christine, Drizzy and Ross spit over a hard-hitting beat. Both rappers discuss their climb to the top and not giving in to distractions. Drake sets the tone with his verses.

Putting the icing on the cake, Ross follows through with the last verse and of course, a fitting sports reference. “A nigga dripping like I got a zillion dollars/Got the trap jumping like Zion when I rebound, then I’m out/And I’ll never talk about it,” Ross relays.

As for “Omertà,” Drake casually mentions an NBA ring reference over the sizzling beat. “The petty king, the overseer of many things/I wish that I was playing in a sport where we were getting rings/I wouldn’t have space on either hand for anything/West Hollywood, know my presence is menacing/Cosa Nostra, shady dealings,” he spits.

This year, Drake has kept himself very busy. Besides being one of the Toronto Raptors’ biggest fans, the Scorpion rapper continues to work on his music. Last week, the 32-year-old rapper teamed up with Chris Brown for an R&B banger “No Guidance.”

Check out Drake’s latest tracks “Money in the Grave” featuring Rick Ross and “Omertà” below.

Omertà and Money In The Grave feat. @richforever out now on ALL platforms